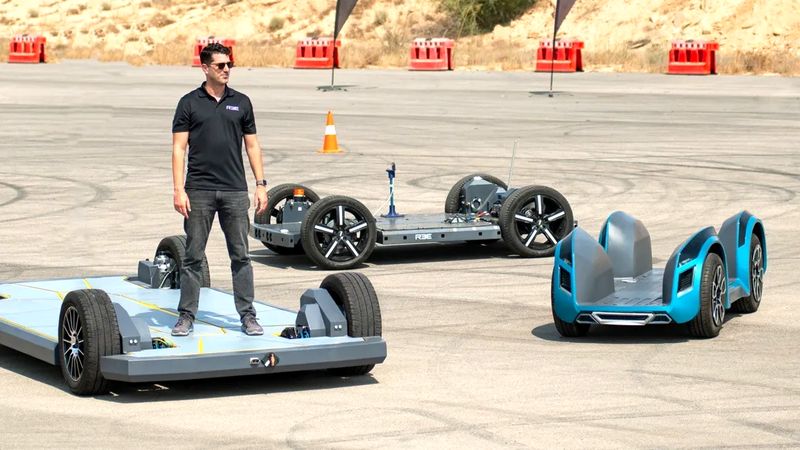 Electric vehicles are incredible. Aside from eliminating fossil fuels, they are whisper quiet, accelerate faster than gasoline cars, and over time they require less expensive maintenance, according to a new study by Consumer Reports. But one of the biggest advantages of EVs is that they are revolutionizing the way cars are built.
How? As this new video from Israeli start-up Ree shows, tomorrow's EV is basically just a giant skateboard. With tiny motors housed in the wheels, the car can take any shape imaginable; any type of seating or storage space can be built directly on this flat base.
Even traditional gas cars were built on a flat chassis. But this chassis was hardly ever so self-contained. Components like your engine and steering system are on top. Then the engine drives a complex series of axles under the car. Of course, you also have brakes, suspension, cooling systems, gas lines and other systems to wiggle around. All this adds up to 30,000 parts that are bolted, pressed, glued and welded together. Today, most modern manufacturing plants use robots to initially frame the entire car like a house - from chassis to body - which means that the floor of your car is permanent from the first moments on the assembly line.
Ree was one of our most innovative companies in 2020, and it is one of several manufacturers working on an alternative platform. Peers include automakers like VW, newer start-ups like Rivian and even Tesla. But the new video of Ree, which can be seen here, is the first time I witness the strange spectacle of these flat chassis whipping on a race track without any other filigree elements.
The smallest is an agile EV designed for tight corners and small freight deliveries for last mile delivery service. The medium is designed for transporting goods and people over short distances. And the largest you see is a fully fledged Class 1 vehicle - a typical car or van.
Because all the powertrain and steering components are built into this base, a Ree vehicle does not require the metal frame or plush seats of a cab to drive. (The skateboards in this demo seem to be operated with a remote control - they do not drive themselves). But when you see how little hardware an electric car needs to be functional to drive, it becomes clear how wild and open the future of electric vehicle design will be. Everything from the wheels upwards can be imagined anew.
Such a vision has already been taken up by Ideo in one of the most impressive car concepts of the last decade. Ideo proposed an office on wheels. It's basically a square room whose walls are windows.
Ree turns some of these more aggressive EV thought experiments into reality (VW is about halfway there with its much vaunted electric bus). Ree's technology has already been licensed by Toyota for the electric truck subsidiary Hino of the Japanese car manufacturer. In a presentation last year, Hino explained how this platform could power small city buses, certainly, but also beauticians and doctors' offices on wheels. Hino even went so far as to develop a bracket that would allow these modular "service rooms" to jump on and off the chassis at will.
How long would this process take? Just long enough to place the cabin on jacks to pull it off the chassis, just like changing a spare tire. With the right business model, you could even imagine taking your minivan in for repairs, and instead of giving you a rental car, the dealer would simply jump out of the cab and glue it to a new or reconditioned floor. So your car as you know it would remain the same, but the powertrain would be new - a process that would take only a few minutes.
Delivery giants like Amazon are interested in these electric skateboards for powering delivery fleets, as they have just unveiled new electric vans built on a similar electric platform from Rivian. For Amazon to have 100,000 electric vehicles on the road by 2030, these vehicles must be easy to repair and have interoperable parts. The skateboard design ensures that a van will never be out of service for long.
But what about the cars for the rest of us? With a little more imagination, you can imagine that consumers' cars will become much more personal as dozens of aftermarket companies build different cabins for a skateboard base. Even if you don't want to buy such a car for yourself, small business owners probably will. Vehicles could mobilize the nature of retail and services, much as food trucks rocked the hospitality industry in the mid-1980s. The design studio NewDealDesign has even suggested that individual vehicle showcases, linked together, could form something like a mobile city, parading through the city like a parade, or perhaps a shopping center on wheels. We are well on the way to a world of incredibly diverse vehicles, where design is constrained more by the jurisdiction of our traffic laws than by the creative choices of a few large car manufacturers.
Was this article helpful? Yes -0 No -011 Posted by: 👨 Adam N. Castillo