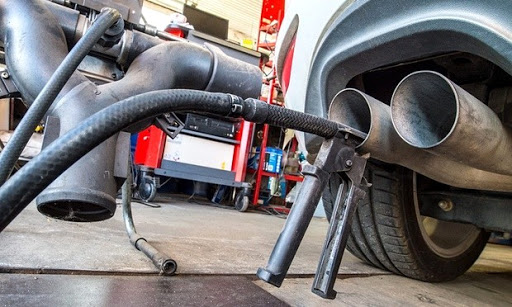 The UK, France and Germany have been accused of hypocrisy for lobbying behind the scenes to keep outmoded car tests for carbon emissions, but later publicly calling for a European investigation into Volkswagen's rigging of car air pollution tests.

Leaked documents seen by the Guardian show the three countries lobbied the European commission to keep loopholes in car tests that would increase real world carbon dioxide emissions by 14% above those claimed.

Just four months before the VW emissions scandal broke, the EU's three biggest nations mounted a push to carry over loopholes from a test devised in 1970 - known as the NEDC - to the World Light Vehicles Test Procedure (WLTP), which is due to replace it in 2017.

"It is unacceptable that governments which rightly demand an EU inquiry into the VW's rigging of air pollution tests are simultaneously lobbying behind the scenes to continue the rigging of CO2 emissions tests," said Greg Archer, clean vehicles manager at the respected green thinktank, Transport and Environment (T&E). "CO2 regulations should not be weakened by the backdoor through test manipulations."

Vehicle emissions are responsible for 12% of Europe's carbon emissions and by 2021, all new cars must meet an EU emissions limit of 95 grams of CO2 per km, putting accurate measurements of real emissions at a premium.

The loopholes would not only raise real world CO2 emissions from new cars to 110g CO2 per km - well above the EU limit - but increase fuel bills for drivers by ?140 per year according T&E.

Huw Irranca-Davies, Labour MP and chair of an influential select committee of MPs, the environmental audit committee, said: "Given that the UK is struggling to bring down carbon emissions and other harmful pollutants from road vehicles it is extremely worrying that the UK government appears to be trying to water down the EU's proposed new road testing regime.

"As well as cutting CO2 emissions, improving the efficiency of vehicles can save lives by reducing the illegal levels of air pollution in UK cities, so the Department for Transport should be making these tests more rigorous not less."

The WLTP test was supposed to remove loopholes that had allowed a gap between real world CO2 emissions and test cycle ones to develop, which EU consultants have estimated at up to 20%.

But the UK lobbied for car makers to be allowed to exploit flexibilities such as externally charging their batteries to full before testing. The Department for Transport also argued that the best available technologies should be shunned in favour of outdated 'inertia classes', which involve manually adding 100 kilo weights to the car to see what effect greater weight on the amount of CO2 the car pumps out.

Research by the International Council on Clean Transportation has found that car manufacturers often game these tests by optimising test car performances at one pound below the desired inertia class.

Germany went further than the UK, calling for the tests to be conducted on sloping downhill tracks, and for allowing manufacturers to declare a final CO2 value 4% lower than the one measured. France supported all the proposed loopholes, bar the 4% lower CO2 value.

Together, these flexibilities would allow some 14% more CO2 to be emitted than EU regulations permit, according to an analysis by T&E. CO2 emissions contribute to climate change, while the nitrogen oxides (NOx) that VW rigged tests for are primarily a cause of local air pollution.

In a letter to the European commission on 29 May, Bob Moran, the Department for Transport's head of regulation and R&D argued that a 'correlation tool' between the old and new tests should include the old procedures for inertia classes and battery recharges.

"It appears to be a common position under NEDC test conditions that manufacturers will (request to) recharge the battery during the soak period, or (request to) replace a partially depleted battery with a fully charged one at the start of the test proper," he wrote. "We believe this commonly used approach should be reflected in the correlation tool."

France backed this position for technical reasons, arguing that it provided "repeatable information". But a fully-charged battery also prevents a car's alternator from kicking in and releasing carbon emissions during tests, as would happen in real world driving situations.

In a sign of growing anger at the VW emissions-rigging scandal, which saw Martin Winterkorn resign on Wednesday, the European parliament's environment committee voted earlier today for real world air pollutant emissions tests to begin no later than 2017.

The panel of MEPs also demanded that no loopholes or deviations be allowed for pollution limits.

"For too long European car makers have been ducking the EU's rules to enable them to keep their highly polluting cars on the road," said Keith Taylor, the Green MEP for south-east England. "The huge scandal with Volkswagen on car pollution rules must focus the minds of EU politicians and the British government. Air pollution kills tens of thousands in the UK every year. With the added unchecked emissions from Volkswagen cars, I worry about how much worse the situation actually is".