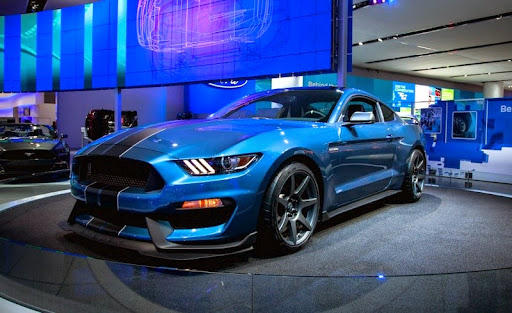 R'nt you curious about the Mustang Shelby GT350R?

Just when it appeared Ford's new Mustang couldn't wow us any more than it already does, along comes the Shelby GT350R. If the V-8-powered Mustang GT is a peach, the next-level-up GT350 is pure enthusiast bliss. So where does that leave the even more focused GT350R, with its aerodynamic addenda and harder-core chassis setup? Can you say track-day domination? Our interest piqued-to say the least-we hunted down the team responsible for the car and uncovered several cool facts about the car.

Of course, the springs and anti-roll bars are stiffer than those on the GT350, and the MagneRide adaptive dampers were retuned to make the car an even deadlier apex killer.

The GT350R's glorious-sounding flat-crank 5.2-liter V-8 engine makes no more power than does the same motor in the GT350. (Output hasn't been finalized; Ford says only that it's good for more than 500 hp and more than 400 lb-ft of torque.) The good news is that the R model carries around about 130 fewer pounds thanks to the deletion of the air conditioning, rear seats, audio system, and trunk lining, as well as a few other measures.

Regarding with the GT350R's weight savings, the engineers managed to remove pounds in roughly equal measure front and rear, so the car has the exact same weight distribution as the "basic" GT350.

The R's suspension is lowered by a subtle 0.2 inch relative to the GT350's. The move was made solely to improve handling, but we think it has an equally impressive effect on the Mustang's stance.

More loud and less weight. What else do you need to know?

Carbon-fiber wheels save weight? Who knew?

Ford says each of the GT350R's exotic carbon-fiber wheels save 13 pounds over an equivalent aluminum wheel like the ones fitted to the regular GT350. Less unsprung weight to deal with means extra-happy chassis engineers-and drivers.

It turns harder and sharper

To sharpen the GT350R's responses, Ford switched to a cross-axis ball-joint connection for the front control arms from a traditional bushing-supported setup. The switch results in a "zero-compliance" connection between the steering knuckle and the control arm.

The deep front splitter, jaunty side skirts, and rear spoiler will be standard kit. There will be no heavier-duty aero package available.

Where R you, R badges?

We studied the Mustang Shelby GT350R's exterior for a good long while while we photographed the car, and we couldn't find a single "R" badge on it. Anywhere.
Was this article helpful? Yes -0 No -0364 Posted by: 👨 Adam N. Castillo