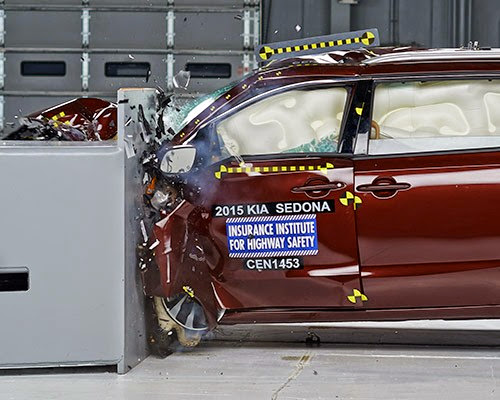 When the Institute released small overlap results for minivans in November, the results were disappointing, with three models performing poorly (see "Minivans with a major flaw: 3 models have dire small overlap results," Nov. 20, 2014). At that time, the Honda Odyssey was the only minivan to earn a good rating in the test. Now the 2015 Kia Sedona joins the Odyssey at the top of the list.

The 2015 Sedona was tested twice, and the good rating is based on the second test. In the first test, the vehicle didn't perform well because the driver door opened. Doors should remain closed in a crash because an open door increases the risk of ejection. In the Sedona's case, the door also performs an important structural function, so the level of crush ended up being much worse than it would have been had the door remained closed.

The doors of most late-model vehicles automatically lock when the vehicle is in gear or reaches a certain speed. In some cases, the feature can be disabled by the consumer. For those vehicles, the Institute's policy is to unlock the doors for the test.

After the Sedona's first test, Kia told IIHS that the door-locking function would be changed so that consumers could no longer turn it off. Sedonas built after November have the new setting, and the company is planning a service campaign to change this on earlier 2015 Sedonas.

In light of the change, IIHS conducted the second test with the doors locked. This time all doors remained closed, resulting in the good rating.

The new Sedona is a Top Safety Pick winner, with good ratings in all the other crashworthiness tests, including roof strength. The previous generation had poor roof strength. The Sedona's optional front crash prevention system earns a basic rating.