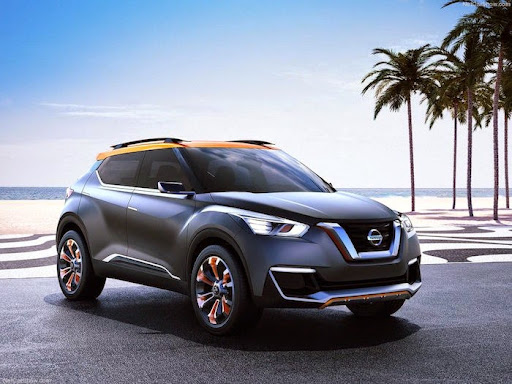 Nissan Brazil debuted the bold new Nissan Kicks Concept at the 2014 Sao Paulo International Motor Show, Latin America's largest and most prestigious motor show. The Kicks compact urban crossover concept is the second Nissan design exploration created exclusively for the Brazilian market, following the radical Nissan Extrem Concept that was one of the centerpieces of the 2012 Sao Paulo show.

"The new Nissan Kicks Concept takes the Nissan Extrem from pure fantasy to a market position that is a little closer to reality - and possibly toward a future production vehicle," said Nissan Brazil President FranÃ§ois Dossa. "While the exaggerated form of Extrem, as the name suggests, was all about fun, the Kicks Concept adds elements of robustness and security that are highly appropriate for today's fast-moving Brazilian professionals."

Under the leadership of Global Design Center in Japan, the concept behind, and creation of, the Kicks Concept was a collaboration between Nissan Design America (NDA) in San Diego, California and Nissan Design America Rio (NDA-R), Nissan's recently opened satellite design studio located at Nissan's Brazilian headquarters.

"The Kicks project has been an outstanding example of how our global design network works to create vehicles that are well suited to the regions where they will be seen and enjoyed. For this concept car, we called on our Rio de Janeiro team for their expertise and local insight," said Shiro Nakamura, senior vice president and chief creative officer, Nissan Motor Co., Ltd. "This type of collaboration between different studios has long been a strength of Nissan and is a key to our design leadership."