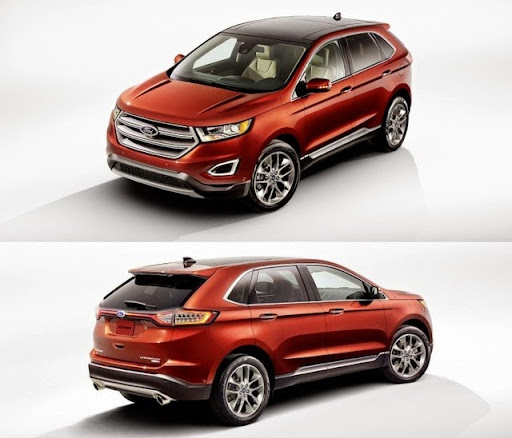 The European-specification Ford Edge has been revealed at the Paris motor show, giving us our best look yet at the SUV that will replace the Ford Territory when local production ceases in 2016.

The Edge headed for Europe appears almost identical to the US-spec model that was revealed in June, though the specifications of the vehicle sold in our market will more closely resemble those of this latest version.

Announced for the first time in Paris is the Edge's 2.0-litre four-cylinder diesel engine, which will be available in two states of tune. Ford Australia is expected to offer only the more powerful of the two, which produces 154kW and 450Nm and is paired with a six-speed dual-clutch automatic transmission. Ford projects average CO2 emissions of 159 grams per kilometre for the high-power diesel, which translates to combined cycle fuel consumption of approximately 6.0 litres per 100 kilometres.

The less powerful engine produces 132kW and 400Nm, but will be available only with a six-speed manual transmission that is unlikely to be offered locally.

The petrol engine line-up announced for the US in June included circa-183kW 2.0-litre and 224kW 2.7-litre four-cylinder turbocharged units and a 3.5-litre V6.

Front- and all-wheel-drive versions of all engines will be offered, though exact specifications and availabilities will vary between markets.

The second-generation Ford Edge will be the Blue Oval's most advanced SUV. It will feature the brand's adaptive steering system, which changes the steering ratio with vehicle speed to optimise response in all conditions, and active noise cancellation technology, which uses microphones positioned in the cabin and generates opposing sound waves through the audio system to reduce engine and ambient noises.

It will also benefit from the company's new Sync 2 connectivity and voice control system, heated and cooled seats, and a hands-free tailgate.

The Edge is limited by its five-seat layout, though the upcoming Ranger-based Everest SUV will offer a seven-seat alternative when it goes on sale in 2015.